The Steins;Gate visual novel was developed by 5bp. and Nitroplus, and officially translated by JAST USA.
It has been released in English for PC, PS3, PS Vita, iOS and additionally in Japanese for Xbox360, PSP and Android. For some of these systems there are unofficial English patches available. It is available on Steam since September 2016.

Steins;Gate Elite is an updated version of the original visual novel with additional and revisited content. It includes animated visual similar as to the anime.
It is confirmed to be released on PS4, PC through Steam and on the Nintendo Switch sometime in 2018 in a tweet by Spike Chunsoft.
In a live stream by Spike Chunsoft on March 23 2018 it was announced that the PS4 and PC version will include a localized version of Steins;Gate: Linear Bounded Phenogram and the Nintendo Switch will include an 8-bit version of the original Steins;Gate visual novel.

Steins;Gate 0 is a midquel to Steins;Gate, which was announced on the 28th of March in 2015.
It takes place in the beta attractor field and it's based on the Epigraph Trilogy which can be found in the Manga & Light Novels section, and Drama CD Beta which can be found in the Drama CDs & OSTs section.
It has been released in Japanese on most platforms and in English for the PlayStation 4 and PlayStation Vita.
The English PC port is to be released on May 8th 2018 on the Steam platform.

Nitroplus and 5bp along with GigasDrop also made another visual novel, Steins;Gate: Hen'i Kuukan no Octet, which is a free 8-bit non-canon extension of the true end of the original visual novel. It also contains text adventure game elements and while its length is not very long, figuring out what to do can take many hours by itself. There also is a manga adaption which can be found in the Manga & Light Novels section.

Steins;Gate Hiyoku Renri no Darling is a comedy, set in odd timeline. It has been translated as a video series by ZakoBot on YouTube.

In Steins;Gate Linear Bounded Phenogram you relive the original visual novel, but through the eyes of the other lab members. It has also been translated as a video series by ZakoBot on YouTube.
In a live stream by Spike Chunsoft on March 23 2018 it was announced that an official localization will be included in Steins;Gate Elite on the PS4 and PC releases. 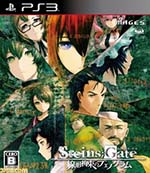 This website was made with the idea to make all available Steins;Gate content easily accessible.
Let me know if I missed anything! Send a mail or message me on Reddit.
All content belongs to their respective owners.